Canon’s XF200 camcorder is the successor to the very popular XF100 and, like that camcorder, can shoot 1920 by 1080 Full HD onto dual compact flash cards at 50 megabits per second with 4:2:2 colour – that’s generally accepted as broadcast spec, though the camcorder only has a single, one-third inch sensor chip rather than three, half-inch or bigger ones, which would be ideal.

It has a full – and we mean full – complement of physical buttons on the body which makes access to all the relevant functions really quick and easy with precious little fiddling about with on-screen menus; that’s a vital timesaver when filming events as they happen such as news, where you can’t control what’s going on and don’t have time to set things up. 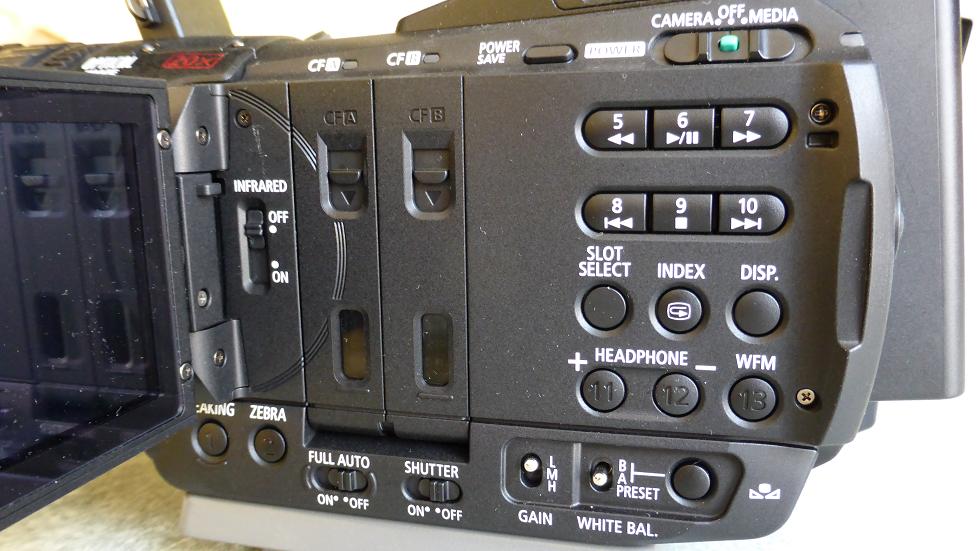 And it’s lightweight and compact, easy portable so you can pop it in a bag and travel the world with it – and accessories – without any problem. That makes it ideal for all sorts of scenarios.

But unlike the XF100 it now totes a twenty times optical zoom lens instead of ten; and that lens reaches from 26.8 to 576mm, in the equivalent 35mm space. Like the XF’s baby brother, the XA20, you do lose 2mm at the wide end when using one of the stabilisation modes though. The iris opens to f1.8 and can be capped to stop closing at f8 if you want to avoid diffraction issues. 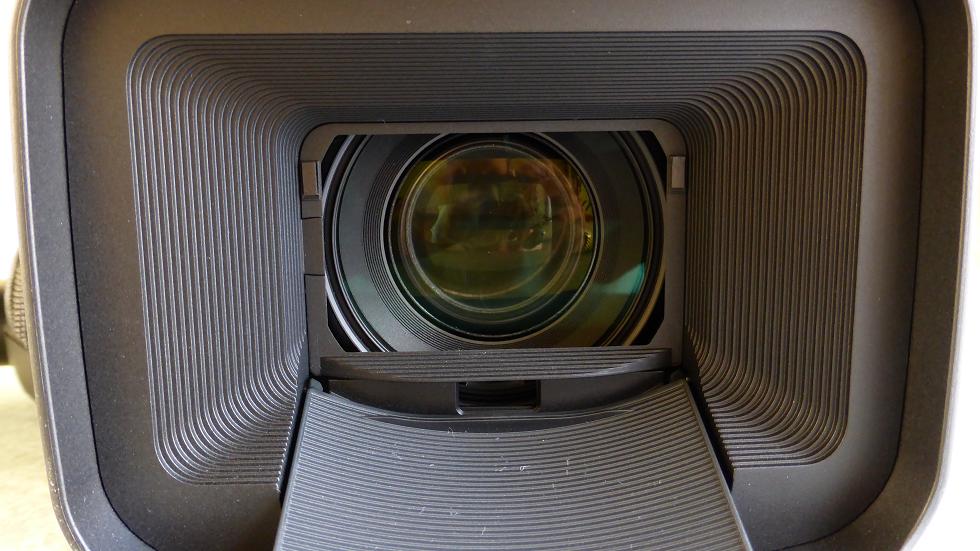 Also new on the XF200 are three lens control rings instead of the single switchable ring that the previous model had; again, a huge asset for immediate control as you shoot; the focus ring in particular is easy to use and get precise adjustments with. 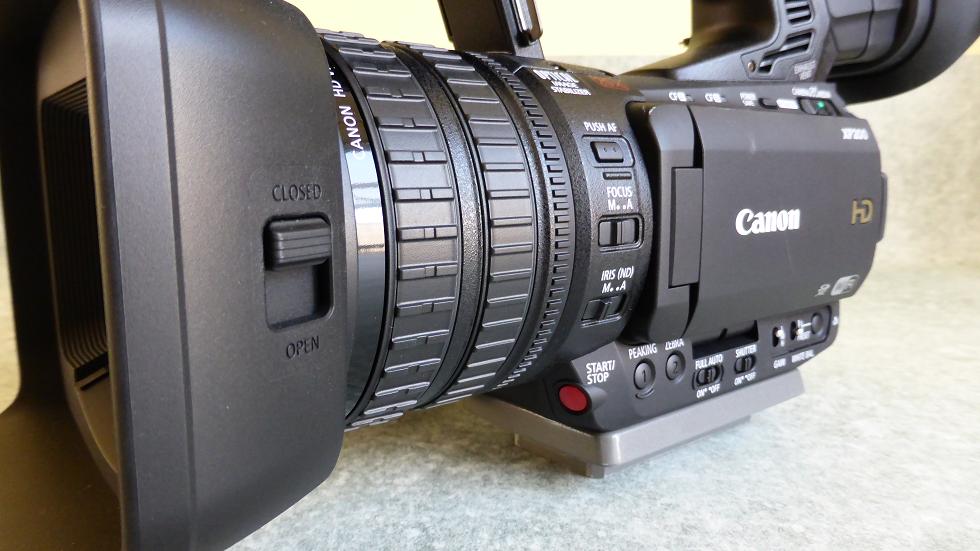 Round the back, there’s an SD card slot for recording in progressive mp4 format at up to 35 megabits a second – and yes, that is simultaneous with the 50 megabit MXF files being captured onto the compact flash cards. 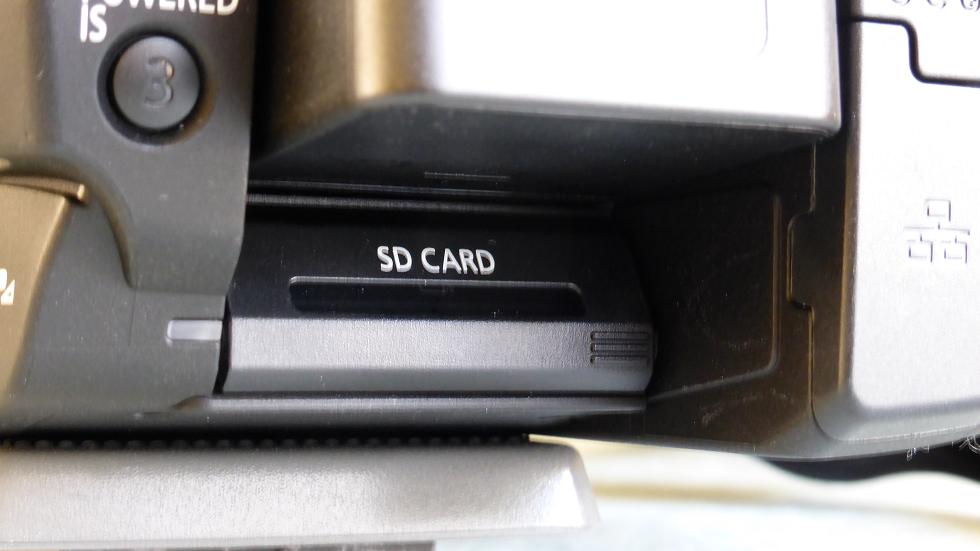 Like the XF100 there’s balanced XLR audio inputs with full control over channel assignment and audio levels. But the XF200 now boasts 4-channel audio, so you can also record the internal mics, or a 3.5mm unbalanced external mic, as well as the XLR inputs which is a useful backup facility if nothing else.

Ergonomically, the camcorder’s improved too with a rotatable handle which locks into nine positions over 120 degress of turn, for easier hand-holding. 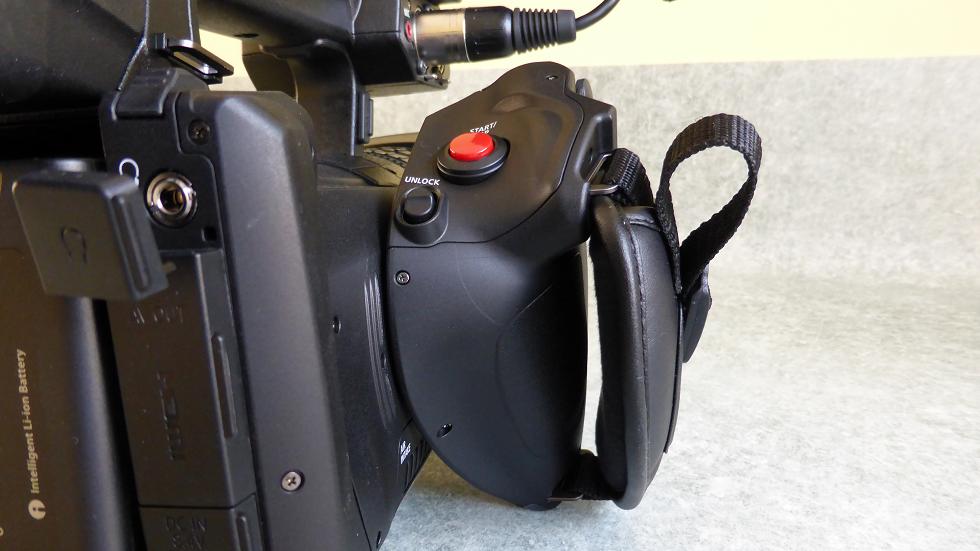 On the back there’s a clue to new functionality – with a hidden RJ45 Ethernet port; inside the XF also now boasts WiFi for remote control, remote viewing and FTP file transfer with MUCH improved functionality over its baby brother camcorder the XA20, in that at last you can actually select – individually – which files you want to send rather than just all of them.

You can even set up a queue of up to 5 mp4 files to be FTPd as you continue filming; another very handy feature for news organisations. Annoyingly, you can only preset one measly ftp server which will frustrate any freelancers who submit video to several organisations.

As already mentioned, the camcorder is festooned with buttons and 13 of these are now assignable to different functions instead of the previous 10. Most of the buttons already have sensible assignments such as toggling zebra bars, peaking, focus magnification, and suchlike but there’s enough of them to leave you plenty of scope for your personal preferences, all configured through the menus. And if 13 buttons isn’t enough, you can set up a customised quick-access menu as well, so you’re never far from your favourite settings. 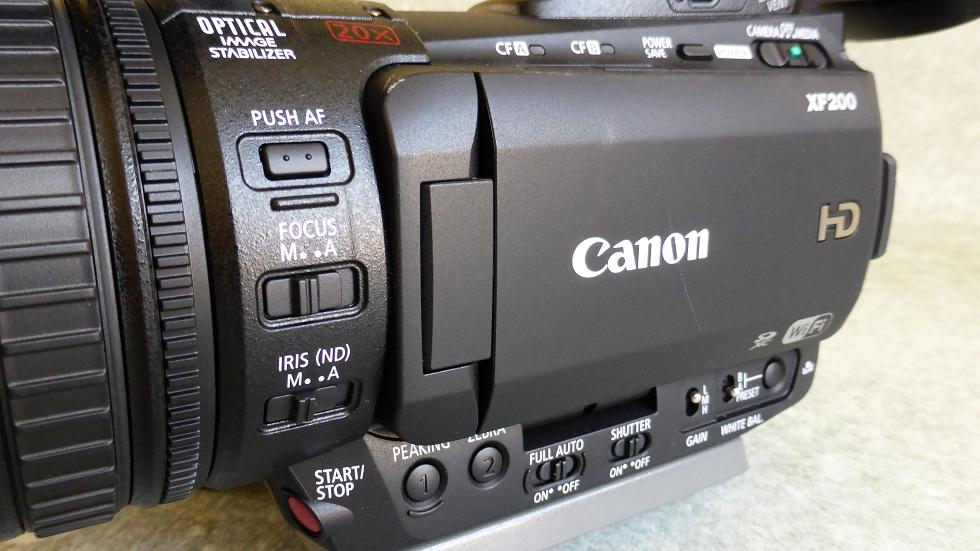 XF200 side controls and screen

Both the flip-out screen and the viewfinder are vastly improved over the XF100 as both now boast 1.23 million pixels – particularly in the case of the viewfinder, that’s a huge increase. The screen is now OLED instead of LCD and it’s a very nice picture, though it’s very hard to see in daylight even if you toggle the screen brightness up by holding in the Display button. 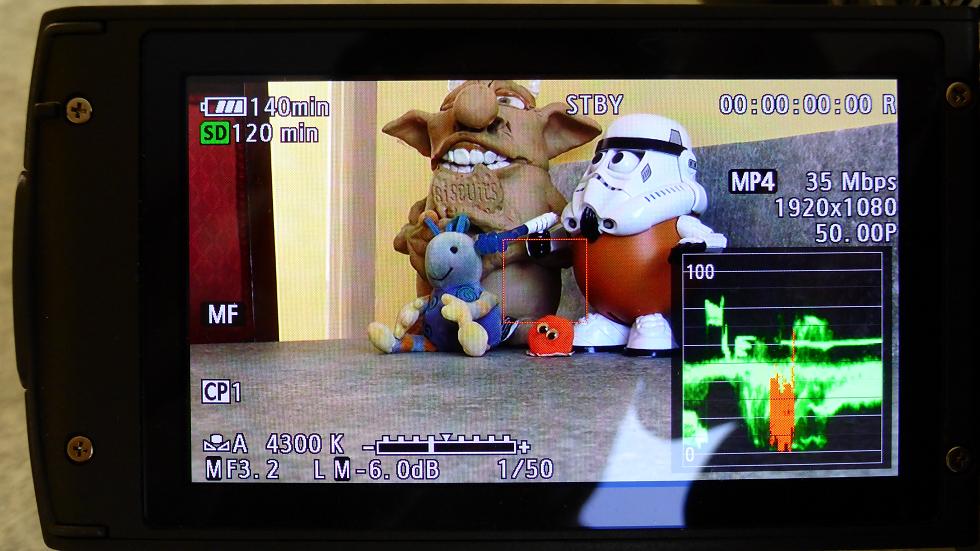 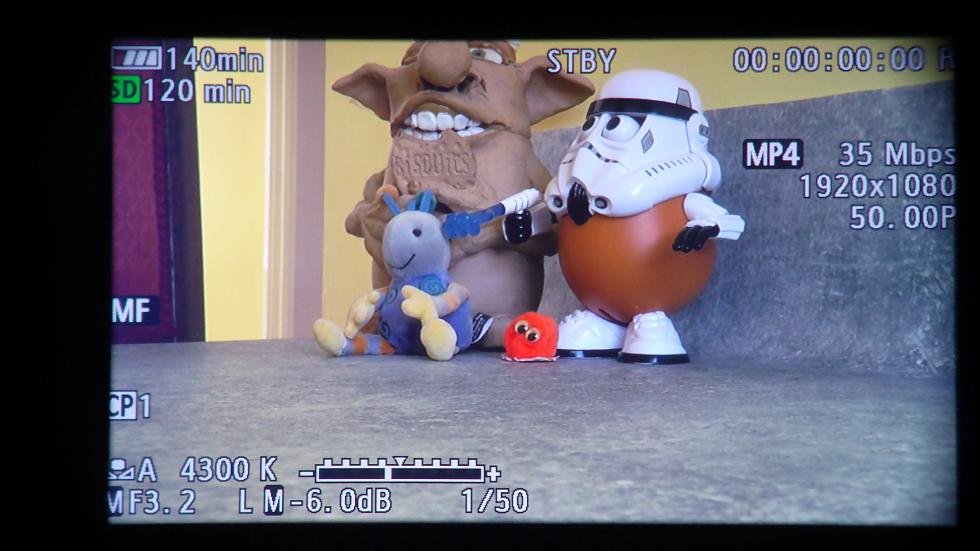 As with the older model, there’s an infra-red recording mode; the inbuilt light for this is said to have a greater throw than before. Canon have included their now-standard flip-type lens hood on the front, and there’s space for a 58mm lens filter to go on there as well.

Also unchanged are the auto ND filters; there’s timelapse, stop-motion and cache recording as well as slow and quick motion.

Nine custom picture profiles can be set up and stored with a frankly mind-boggling array of parameters each of which has its own subset of settings. In fact, configurability is one of the key assets of this camcorder which sets it apart from consumer models. Pretty much everything can be set up the way you want it from the operation of the lens rings to the colouration of the display and the adjustment to the audio.

Whilst the XF200 does offer a 3.5mm headphone socket on the back, a 2.5mm LANC control port on the side and an HDMI output, if you want Genlock and SDI you will have to fork out extra cash for the XF205 but apart from that the two models are identical, just as it was with the XF100 and 105. 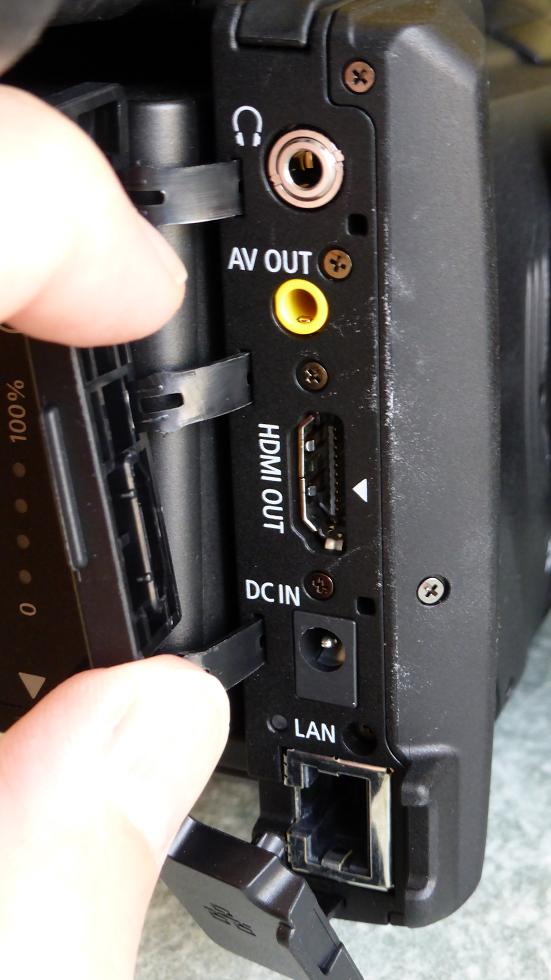 So much the specs though – what do the pictures actually look like? Well these days it seems hard for a camcorder to have bad pictures, such is the level of technology, and the Canon doesn’t disappoint.

We found the default black level to be a little high (of course, this is configurable) and have spent a while playing with custom knee settings to roll off the highlights but in terms of general sharpness and acceptability of the images, they’re fine. They’re exactly what you’d expect from this kind of camcorder.

Autofocus, should you wish to use it, is fast and accurate at least in good light. And auto exposure is not bad though you’re always going to want to do this manually in anything other than a general shot.

The zoom is pretty fast, for a camcorder like this, though you can also set it to a crawl if you want, with 16 speeds in each of three different categories available.

As for low light performance, Canon have worked some bizarre magic here whereby even though the XF has the same lens and sensor as the XA20, its images are brighter in the dark but be warned – they are noisy, even with limited or zero gain. This clearly visible image noise is probably the single serious disappointment of this camcorder, with grain even noticeable in well lit scenes.

Be careful how much noise reduction you use – or permit the camera to add – though, as anything above about 8 out of 12 smears the image quite drastically to smooth out grain, and by the time you get to top whack, it’s a horrid mess.

Thankfully, Canon has included a waveform monitor to help with exposure, which can also be toggled to show a vectorscope, and an edge monitor for focus assist, alongside image peaking.

A BP955 battery is supplied which claims to give 255 minutes life when fully charged; there’s a one-touch power save button on the side of the camcorder which puts it into standby, from which it can be instantly reawakened.

You’ll notice on the bottom and handle of the camcorder that there are cooling vents – and inside there is a fan; this can be on all the time or set to turn itself off during recording. This noise may worry some but panic not, it’s not that audible at all. 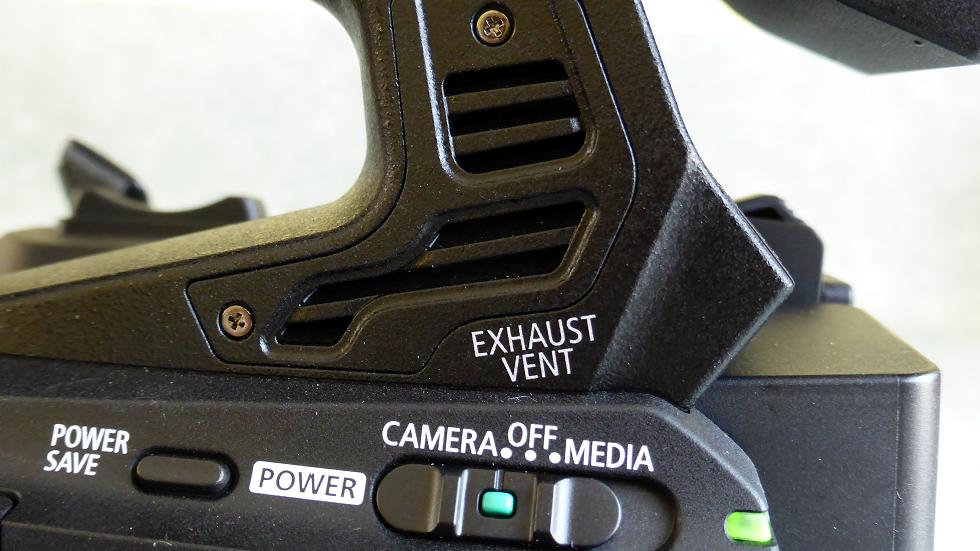 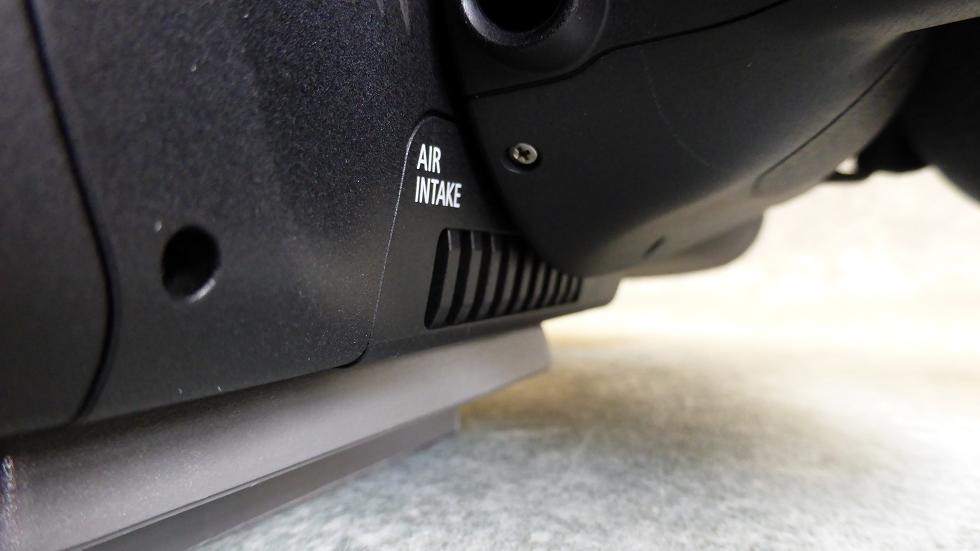 Of more concern is that you’re not supposed to obstruct the vents but when you’ve got the tripod plate on and your hand in the strap, you are inherently blocking the air intake to some degree, so this looks like poor design on Canon’s part. 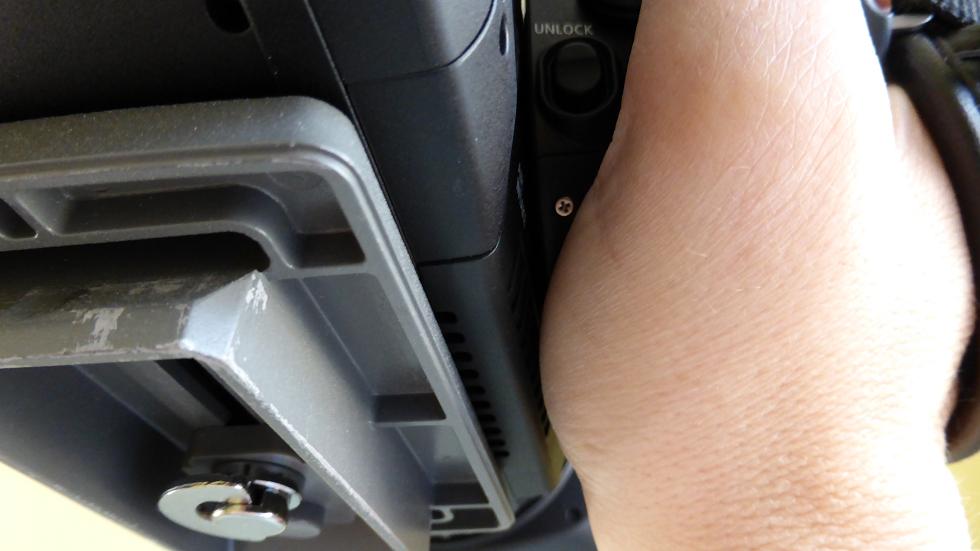 Flash banding, that half-frame mess you get when a camera flash goes off, is inevitable on most CMOS sensors, so it’s no more a problem on the XF than any other such camcorder. And Canon seem to have sorted the additional flash problem that affected the XA20, where you’d sometimes get half a second of shimmering after the flash; we couldn’t make that happen at all on the XF.

There are some frustrating limitations though, such as exactly which mp4 formats can be recorded at the same time as MXF.

There’s no low bitrate interlaced format for dual codec recording; that would have been useful for TV news crews to send back mobile footage for broadcast rather than web use.

You don’t get a last clip review function when in dual-codec mode, and it’s played minus the sound so it’s pretty much useless anyway.

Staying on this theme, you don’t get cache recording when in dual codec mode – but you can set the mp4 to continuous record while you start-stop in MXF.

The focus magnification button is surprisingly awkward to reach with your index finger unless you brace the camcorder with your left hand so you can loosen the grip in your right.

And, one really annoying aspect is that the waveform monitor doesn’t show up in the viewfinder, so on a bright day when you can’t see the screen and really need the scopes to help set exposure, you can’t see them.

So, is this camcorder worth the money over the XF100? It does have substantial improvements but it is double the price. And Sony have just brought out their PMW-X70 which is really an XA25 competitor but could easily fit many uses for which people would be considering an XF.

So this camera’s advantage basically comes down to the broadcast standard codec and the multitude of buttons. If you don’t need those, the Sony X70 is over a thousand pounds cheaper. And that could be a killer blow for this Canon.