Version six of the popular RX100 pocket (ish) camera has been announced by Sony with yet more whizz-bang features – and a price tag to match. 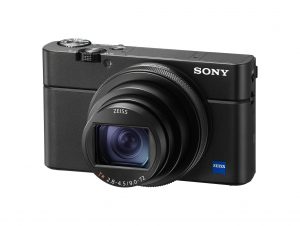 Autofocus is claimed to be as fast as – wait for it – 0.03 seconds with 315 focal-plane phase-detection AF points covering approximately 65% of the frame. That image gets recorded by a one-inch, 20.1 megapixel “Exmor RS” sensor. There’s optical image stabilisation and continuous stills shooting at 24fps with continuous autofocus.

In terms of video, traditionally one of the RX100’s strong points, Sony claim this model is “packed with a variety of video capabilities that will satisfy even the most demanding video enthusiasts”. Apart from those who actually want decent audio, that is, with the camera still having no input for an external microphone and relying on its tiny inbuilt, fur-less jobby.

It does, however, do 4K with HDR mode using Sony’s Hybrid Log Gamma, a sort of pseudo-HDR, as well as S-Log2/3 and super slow motion. 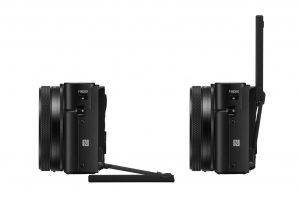 The OLED viewfinder’s got an impressive 2.35 million pixels and pops out of the top of the camera as in earlier versions.

See the full spec and all the disclaimers about them at presscentre.sony.eu/pressreleases/sonys-announces-rx100-vi-that-combines-high-magnification-zoom-24-200mm-large-aperture-worlds-fastest-af-speed-in-ultra-compact-body-2530958