Sony’s HXR-NX100 camcorder is a very low cost, HD-only, entry-level newgathering-style all-in-one device. t’s slightly bigger than a Canon XF200 but not by much and is lightweight and easy to carry around. A step up from consumer grade camcorders, this offers a full complement of manual controls along its body. 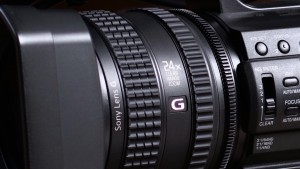 Three lens rings deal with focus, zoom and iris, each being easy to grab and turn via a textured finish. The lens offers 12 x optical zoom and 24x with Sony’s Clear Image enhancement which we’ll come back to.

The first sign of the low cost nature of this camcorder is the lens cap which is detachable and therefore loseable rather than a flip-open hood as found on Sony’s more expensive camcorders. 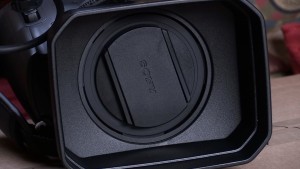 As mentioned, all the main controls are on the left side including customisable buttons, auto and manual toggles and audio controls. The top row contains three assignable buttons; the other two are on the other side, on the handgrip behind the zoom rocker. A three-position ND filter is included for shooting in bright light so there’s no need to screw on filters to the lens – just flick the switch to what you want. 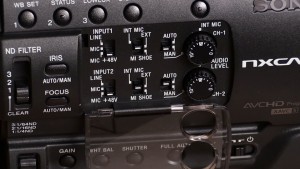 Whilst you don’t get the usual three-position toggles for immediate access to gain and white balance presets, you can change them by first pressing their button and then clicking this button up or down to change the value. It’s more flexible than a preset but more time consuming.

Two channel audio is set from a typical selection of inputs and gain knobs hidden behind a transparent flap. A quick-to-open mic holder is provided on the top right of the camcorder. Below that you’ve got the two XLR balanced inputs covered by a rubber flap to keep muck out. No shotgun microphone is included with the camcorder by default but again as usual there is a basic built-in mic at the front of the top handle which would be OK for gathering generic atmos sounds provided you cover it with windjammer fur.

Alternatively, Sony’s “MI” hot shoe on top gives the option of connecting certain types of mic such as radiomics directly into the camcorder without needing cables. 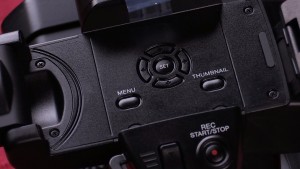 Another sign of cost cutting comes underneath the flip-out LCD screen, the paucity of controls meaning you do a lot of pushing and clicking on the ones that are there, either to watch footage back or to change options in the menus. Not much on the top handle either – yes a record button and zoom toggle but no zoom speed control and no mounting holes for accessories. This is a pared-back camcorder with just the essentials.

The back has the battery compartment – the classic NP-F type of cells in use here. Two SDXC card slots provide for dual and relay recording. Don’t be fooled by the BNC connector; it’s not HD-SDI but composite, with stereo analogue audio on the phono jacks below. HDMI is also there and USB.

Finally, a 3.5mm headphone jack is sensibly placed and a LANC compatible remote jack is a welcome sight. Over on the handgrip you just get the record button and a charging LED.

By far the worst feature is the viewfinder. It’s possible to get focus and exposure with it but it’s a nasty display that flickers the colours as you look – and it won’t come on if the LCD is on, and vice versa. Really inconvenient in live event shooting where you often flick between screen and viewfinder according to the conditions.

Luckily, the screen isn’t so bad, a very traditional Sony look in the way it’s laid out; there’s focus peaking in various colours and zebra bars and a histogram to help with exposure.

But what do the 50 megabit XAVCS images actually look like?

Well the video above includes a selection, some handheld, some on the tripod, at various f-stops and ND filter combinations, all at 1/50th shutter and mostly zero gain except where noted.

The zoom has a 12x optical range but because there are so many pixels on the sensor, Sony can crop in to give a 24x effective range without pixel interpolation. This they call Clear Image Zoom and if we’re honest, we’re not fans. You can see when it’s turned on and the zoom goes into that 12-24 range we think. But it’s better than nothing perhaps. 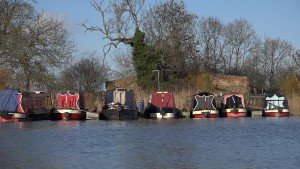 Three stabilisation modes are provided: off, standard and active the latter of which crops in the image then using the spare pixels to steady the shot and it works well as these tests show. Not, it’s not a steadycam but what do you expect?

Just before we get to low light testing, have a look at the sample of a dark but properly exposed image for any noise. As YouTube compresses everything so heavily we’ve blown up a section of the image to help. We think it’s reasonably well contained; we’ve certainly seen a lot worse with our XF200 which we’ll come to in a moment.

Our low light test scene is lit only by the 2 Watt LED bulb plus an identical one directly opposite and out of shot, and another just behind the camera.

At 15dB gain, the scene is roughly as our eyes would see it and given how much we’re boosting the signal, we’re impressed. When we tested Sony’s PXW-X70 it had a similarly impressive signal to noise performance under gain, and the NX100 has a similar if not identical sensor. Yes, you can see the noise – but this is 30dB of gain, it’s very good going in our opinion. 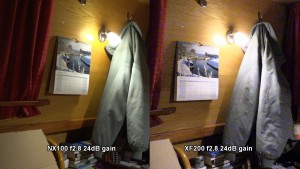 It’s more impressive when you contrast with how badly Canon’s XF200 does, which would be a competitor camcorder at this price range. Set identically as regards iris and gain, the Canon is hugely noisy – and its auto white balance is doing very badly compared to the Sony; the coat in the picture is actually green, not grey. And the noise in the Canon image is shocking.

That said, the Canon’s lens does open wider, so we tried that; matching the brightness gives f1.8 on the Canon at minus 3 dB compared to f2.8 and 9dB on the Sony. So you’d think the Canon actually has the edge.

But as you turn things up, you can see the Canon’s image is terrible compared to the Sony despite its wider iris and lower gain. We don’t know what magic Sony does in its camcorders to mask noise but the Canon gets a sound thrashing in noise and colour.

In conclusion then, Sony’s NX100 has very decent HD pictures. It’s got reasonable stabilisation for handheld work and all the necessary manual controls which are easy to use, plus there’s inbuilt balanced audio. The downsides are that dreadful viewfinder which won’t stay on if the screen’s on, and it is a “no frills” camcorder, it’s kind of what you see is what you get. But the price is astonishingly low, pitching it only just above where the top ends of high street holiday camcorders ends.

And no, it doesn’t shoot 4K nor is there any plan for it to do so. But if you’re in education, a video journalist, a web producer or an in house corporate marketing department which wants to put some video online without the aggro of changing lenses, messing about with split audio, dealing with shallow depth of field and so on, this is practically a disposable tool for the price that you can pick up and shoot with in any scenario immediately and get decent results. So if you’re not bothered by 4K but you want a good, controllable HD camcorder at a very sensible price, this is worth a look.