This is a review of the Tascam DR-10C. It’s not a new product but having only recently purchased it, I’ve been so impressed that I thought a video and writeup was in order.

It’s a tiny, lightweight (51g) audio recorder, designed to complement a radio mic system but with many other uses, as I’ve been finding.

Powered by a single triple-A battery, it records continuously for up to ten hours, a claim I verified twice.

It has a 3.5mm mic input jack with a locking thread if you have a suitable mic. But what’s interesting is that it then has a 3.5mm output jack. The idea is that you put this between the lavalier microphone and your radio mic transmitter. 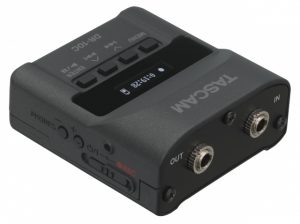 Yes, this means someone now has to wear two packs but the upside is that if there’s any dropout or problem with interference on the radio mic – you still have a separate backup recording on the tascam, made prior to the radio system.

Indeed, if you don’t need realtime monitoring or the radio mic at all, you can just use the Tascam and sync up the audio later. That makes for a really compact system for the person wearing it, ideal maybe for weddings and suchlike.

Operation is very simple: slide the recessed lever on the side upwards, hold for a second and release – and the Tascam goes straight into record. Do the same to stop recording. Switching on and off is similar, but by sliding the lever down.

There’s a tiny but surprisingly readable screen which indicates whether the unit is recording, and gives audio levels although annoyingly, it only shows the levels in standby, not when recording which always makes me nervous. I like to see the meters moving when a device is recording.

The device has options to record a second track with a lower level in case of any unexpected peaks. Recording levels are just at a limited number of set values rather than variable but I found them entirely satisfactory.

In theory the device is sold configured for specific lavalier microphones such as those from Sennheiser but you can also get versions for Sony/Ramsa and Shure. I don’t have a Sennheiser lav and instead plugged in the Rode Lavalier which worked absolutely fine.

Recording quality is excellent – the entire voiceover for the review video was recorded using the aforementioned Rode lavalier plugged into the Tascam. Files are 24-bit, 48kHz and are saved to a microSD card.

You can play files back into headphones and transfer them off the device through the micro-USB connector.

There are more uses for this than you’d expect. As a sometime vlogger, I like to use a tiny shotgun mic on my camcorder but of course this points forward, which is great for capturing what I’m filming, and hopeless for recording my commentary – and vice versa.

So now I’ve taken to wearing a lav mic plugged into the Tascam to record my commentary, with the shotgun on the camera as you’d expect. Then I sync the two later, which is no more complex that any dual recording set-up; you just have to remember to hit record on the Tascam, though because it runs for ten hours on a single battery, sometimes I just press record and let it run until the day is out. Huge files, obviously, but no worries about not recording.

I also used this for an two-person interview recently where the camcorder was set back from the subjects so a top mic would have been terrible, and I had no radio mic. The video includes a quick sample – notice that the Tascam and a lav mic is just clipped to the chair between the two interviewees. Given that location, the omnidirectional mic, and filming outdoors I think it sounds remarkably good.

In summary, I’m very pleased with the Tascam DR-10C. It was bought as a backup for a specific corporate job but has since proved to be useful in other applications. Though it’s not as cheap or as flexible as some other devices like the Zoom H1, it’s so well designed for its niche that it’s worth the money if that niche is what you do.

A link to buy the Tascam is included in the description below, along with a link to the product’s page on the Tascam website. Note that in some other countries, a slightly different version is sold without the radiomic output, so just as a standalone recorder. There’s also a version with an XLR input and you can get it in white too. Check which one you’re buying before you hit “buy”!

Speaking of buying, these are Amazon links for the various versions – if you buy through them I get a tiny commission which really helps me! Thank you.